The store will not work correctly in the case when cookies are disabled.

Well-absorbed curcumin for relief from occasional joint and muscle soreness*


Meriva-SF is a well-absorbed, sustained-released curcumin formula.* Meriva® is the most clinically studied curcumin on the market with 29x greater absorption than ordinary curcumin.*
$44.00
Log in for Member Price
Free Shipping on orders over $99
Share this page

When you click the "Share this page" link, the URL is automatically copied to your clipboard with your Trainer ID embedded.

Simply paste the URL into your social media app, email, or text message and send.

When a user clicks the link and makes a purchase on this website, your Trainer ID will be automatically be attached to the sale.

Please remember that you must be logged into this site for the "Share this page" button to appear. 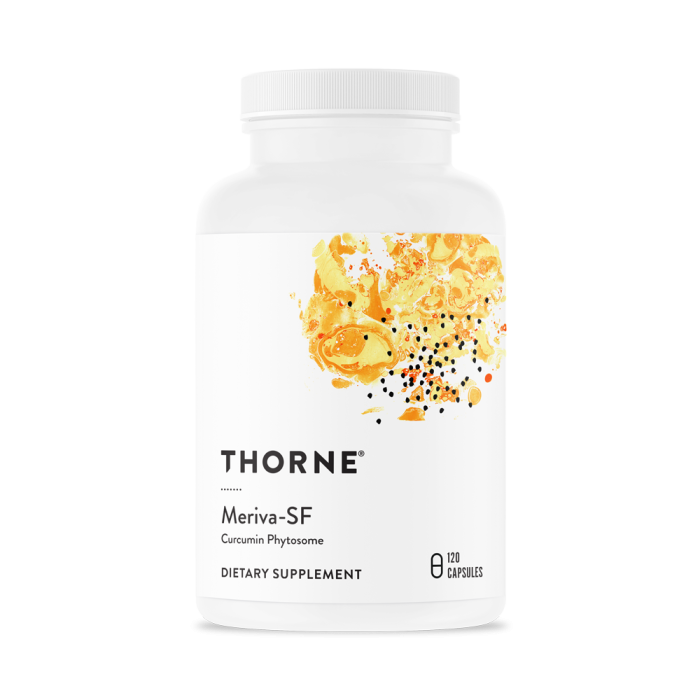 
Used in Asia for thousands of years, curcumin is a potent antioxidant that offers multiple health benefits, including support of joint, liver, GI, eyes, and cardiovascular function.* Normally, however, curcumin is poorly absorbed in the bloodstream, whether it comes from food or nutritional supplements. Meriva curcumin phytosome, the most clinically studied curcumin on the market, is a unique curcumin extract with significantly better absorption than other curcumin extracts.* In fact, a human study demonstrated 29-times greater absorption for Meriva than with ordinary curcumin.*


Curcumin is an antioxidant flavonoid that helps maintain the body's normal inflammatory response through optimization of cytokine production.* Meriva's superior curcumin absorption is attributable to a unique formula that contains three curcuminoids (95% curcuminoid material) and is based on Indena S.p.A.'s proprietary "phytosome" technology. A phytosome is a plant extract bound to a phospholipid (from sunflower oil in the case of Meriva-SF). Phospholipids are essential components of all human cells; and although the body makes phospholipids, such as phosphatidylcholine and phosphatidylserine, phospholipids can also be obtained from food or nutritional supplements. When taken orally, phospholipids are very well absorbed. The proprietary phytosome technology utilized in Meriva-SF attaches a curcumin extract to a phospholipid, which optimizes the curcumin's absorption.* Meriva supplementation results in higher plasma concentrations of curcumin from a much smaller amount than with ordinary curcumin supplementation.*


*These statements have not been evaluated by the Food and Drug Administration. This product is not intended to diagnose, treat, cure, or prevent any disease.