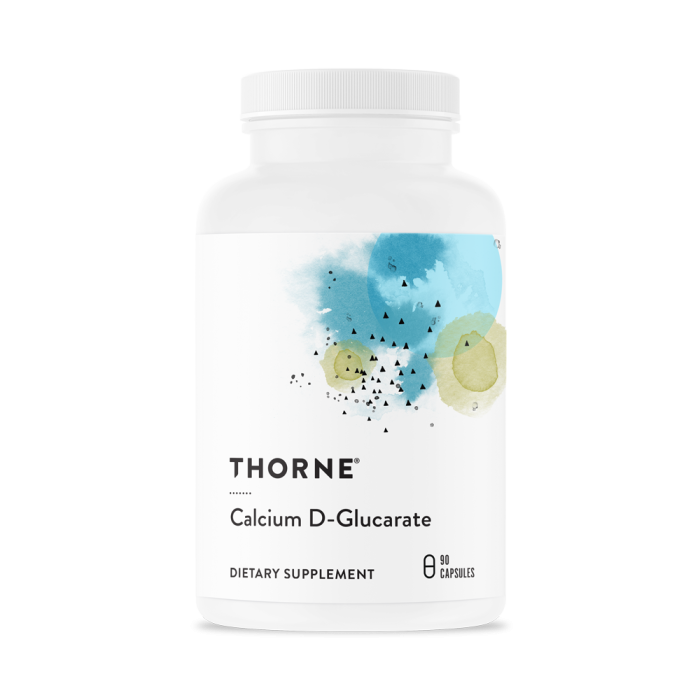 Skip to Navigation Skip to Content
Reviews
Overview
Calcium D-Glucarate (CDG) is produced naturally in small amounts by humans. CDG supplementation has been shown to prevent the recycling of hormones and undesirable environmental toxins, thereby promoting liver detoxification and the excretion of these potentially detrimental substances.* Other applications of CDG supplementation include the maintenance of already normal cholesterol levels and facilitating healthy hormone metabolism.*

How does it work?

Glucuronidation is the liver's normal process of attaching a glucuronic acid molecule to potentially harmful substances to detoxify and eliminate them from the body.* During phase II liver detoxification, certain hormones and various fat-soluble toxins will undergo glucuronidation and be excreted through the bile or urine. Calcium D-Glucarate helps this elimination process to occur uninterrupted.*


The more detailed version: Upon ingestion and exposure to the acidic environment of the stomach, Calcium D-Glucarate is metabolized to form D-glucaric acid. D-glucaric acid is further metabolized in the gastrointestinal tract into three compounds that exist in equilibrium and are comprised of approximately 40-percent D-glucaric acid, 30-percent D-glucaro-1,4-lactone, and 30-percent D-glucaro-6,3-lactone. These compounds are then transported to the blood and various internal organs, and subsequently excreted in the urine and bile. Although D-glucaro-1,4-lactone is apparently the most pharmacologically active of the three, it is not commercially available. Also, Calcium D-Glucarate administration results in longer inhibition of beta-glucuronidase (five hours versus one hour) than does D-glucaro-1,4-lactone, so it is the compound used.*


Calcium D-Glucarate's detoxifying and chemopreventive properties are attributable to its ability to increase glucuronidation, and the accompanying excretion of harmful compounds.* It does so by inhibiting the enzyme beta-glucuronidase.* During Phase II detoxification, hormones and various undesirable lipid-soluble toxins are bound to glucuronic acid in the liver (glucuronidation) and excreted through the biliary tract; however, beta-glucuronidase can unbind these toxins, which makes it possible for them to be reabsorbed rather than excreted. D-glucaro-1,4-lactone is the metabolite that most inhibits the activity of beta-glucuronidase, thereby increasing the excretion of toxic compounds and decreasing the activity of harmful substances that are most active in their unbound state.* Inhibition of beta-glucuronidase by Calcium D-Glucarate metabolites ultimately results in potentially decreasing the risk of toxicity.*


In addition, by reducing the activity of beta-glucuronidase and the viability of harmful intestinal bacteria, the salts of D-glucaric acid have been shown to enhance enterohepatic circulation and reduce cholesterol synthesis, thus resulting in maintenance of healthy cholesterol levels.*


*These statements have not been evaluated by the Food and Drug Administration. This product is not intended to diagnose, treat, cure, or prevent any disease.